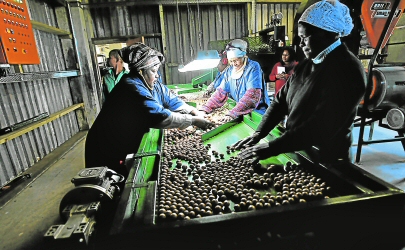 Posted at 06:24h in News Articles by ecmacadamia
0 Likes
Share

25 July 2014 – THE Western Cape has the winelands, KwaZulu-Natal has sugarcane and now the Eastern Cape wants to be known for the massive production of macadamia nuts.

With 4200 hectares of land targeted for macadamia production in the coastal belt between East London and Bizana and a processing plant planned for the East London industrial development zone, the little white delicacy is already making inroads in the lives of the province’s rural community.

Ncera Macadamia Farm (NMF) director and Kula Investments chief executive Mkululi Pakade said the farm outside East London employed 167 people and was a true example of how local communities “can own the full value chain” of macadamia nuts.

The Ncera project was started in 2005 on land that is being leased for 80 years from chieftainess Jongilanga. The community owns 51% of operating company NMF and shares in profits through the Vulindlela Investment Trust.

NMF operations manager Sithembele Dyasi, who worked himself up in the company from a general worker, told delegates at the Macadamia Summit in East London that the Ncera harvest over the past two years had exceeded expectations.

“We have a four-star nursery, which will soon be a five-star nursery, and in our second year of production we harvested 50ha of high- quality macadamia nuts. We want to double the production next year,” Dyasi said.

The macadamia industry had the capacity to generate R313-million in land rental, salaries and trust profits per year once the total 4200ha earmarked for macadamia nut production in the Eastern Cape was fully operational, NMF managing director Wayne Simpson said.

Simpson said there was an under- supply of macadamia nuts in the world and their production would not only transform idle land into high-value macadamia orchards, it would also transform the lives of rural communities.

The million trees planned to be planted over the next 20 years would have the capacity to employ at least 4000 workers, he said.

Not only did the community which owned the land to be developed have the first right of refusal for all jobs created through the macadamia production on their land, they would also benefit from a lifelong dollar-based income-generator as members of various community trusts, Simpson said.

Indibano – an NGO set up to empower chiefs by trading with government and industry – Kula Investment Group, TGK Group and Green Farms Nut Company are the private investors involved in the NMF.